Bobby Nash is a newcomer on the western scene, but one that no doubt we will be hearing more about. Recently his first western short story was part of the highly regarded A Fistful of Legends anthology. The Archive sat down for a Q&A session with the talented new western voice.

1 - Was your story in A Fistful of Legends your first attempt at writing a western?

Yes. Shadows On The Horizon for A Fistful Of Legends was my first attempt at writing a straight up western story. I did attempt a sci-fi western comic book script years ago that unfortunately never went anywhere. It was more sci fi than wes 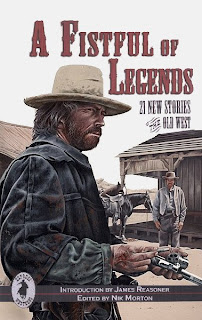 2 - How long have you had your interest in westerns? How did it initially develop?

I’ve enjoyed westerns on and off most of my life, primarily in movies and television. It wasn’t until much later that I read any western prose. There’s something fascinating about the life as portrayed in the western movies that I latched on to. Joining the conversations on the BHW Yahoo Group has re-ignited my interest in western fiction. When my schedule opens up I plan to attempt a western novel.

3- What would you say new readers will find with a Black Horse western?

I think readers will find good escapist stories. When I read a novel or comic book, I want to be drawn into a story that will keep my attention with characters I care about. I’ve found that in the Black Horse westerns and I think others will as well.

4- The western has been on something of a revival in recent years. Where do you see the future of the genre going?

It is nice to see more western titles in the bookstores and comic book shops as well as on movie screens. I hope the trend continues. Genre popularity is cyclical so I knew it was only a matter of time before the western returned to prominence. I see a bright future ahead.

5- Tell us a little about the way you work - do you write a set amount each day, have a target to reach?

Boy, I’d love to say that I have a rigid schedule that I adhere to religiously... but it would be a lie. Ha! Ha! I try to write, or do something writing related, every day. I tend to plot in my head more so than writing outlines and then I just start typing. An average writing day sees me doing anywhere between 2,000 - 3,000 words. There have been days I write more, some days less.

6-Who are your favourite writers, whatever the genre?

Some of my favorite writers include Michael Connelly, Stephen J. Cannell, Joseph Finder, Howard Hopkins, Lance Howard, Martin Powell, Peter David, Ed Brubaker, Darwyn Cooke, Jack Martin, Van Allen Plexico, Nancy Holder, and Alex Kava. There are others I enjoy as well, but if I continue this will become a long list.

7 - How often is your website updated? Is this the place to go for readers to learn more about your work?

Sadly, www.bobbynash.com is not updated nearly often enough and is sorely out of date. I am currently working on it, but I’m probably going to have to get some professional help to get it just right. My Nash News blog at http://bobby-nash-news.blogspot.com is updated fairly regularly. You can see all of my book covers and synopsis at www.comicspace.com/bobbynash. I have other social media/promotional sites as well and you can find links to them on these sites.

8-And you are very active in the BHW forum - does the fact that there is this community between BHW writers help you at all in your own writing.

Absolutely. When I was writing Shadows On The Horizon for A Fistful Of Legends, there were a few writers on the BHW group who kindly gave me feedback, offered critiques, and answered questions. Even before the anthology opportunity came along the group was very welcoming to me, even though I was not writing westerns when I joined.

The group is also very good about posting links to websites that might prove of interest, which helped with research. One thing about the BHW group that I really appreciate is how many of the writers help promote one another. It is not uncommon to see one writer posting praise for another writer’s book on their personal blog or site. That type of mutual support is amazing.

9-Tell us about any future projects.

I have several short stories scheduled to appear in anthologies in 2010. The Green Hornet Chronicles from Moonstone Books features tales from the 60’s Green Hornet TV series. Secret Agent X (vol. 4) and Ravenwood: Stepson of Mystery (Vol. 1) are pulp anthologies from Airship 27 Productions and Cornerstone Books. Tales From The Zero Hour: Weird Tales from Blinding Force Productions features stories that are a little out there. Mortis Tree is a collection of stories from multiple genres including my science fiction tale.

I have some comic book and graphic novel titles coming in 2010 as well. Yin Yang is a super heroic adventure graphic novel coming from Arcana Comics 2nd quarter of 2010. Operation: Silver Moon is an on-going supernatural spy series set during World War II from Post Mortem Comics. I plan to collect the Life In The Faster Lane comic strips I write and draw into a comic book edition this year as well. Other titles are currently being shopped around to publishers.

I’m also working on several novels that I plan to complete this year. Blood Shot, Games!, and Evil Intent (the sequel to my first novel, Evil Ways) are thrillers that are each pretty far along. After that I have plans for a Lance Star: Sky Ranger novel called "Cold Snap," a crime novel, a western, and more. I also have a sci fi novel at a publisher for consideration. Fingers crossed.

Film: Tombstone. Book: This one’s tough. Probably Lonesome Dove because I’ve heard so many good things about it, but haven’t read it yet.

Thanks, Gary. This was a fun interview.