Anyone who thought the Black Horse weekend was going to be nothing but cowboys and Indians is clearly mistaken. The 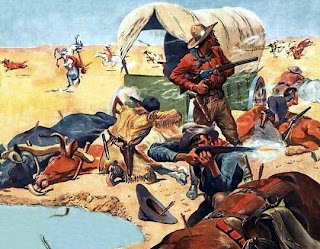 average western is much more complex than that, but you know there’s nothing wrong with cowboys and Indians, sometimes its nice to know that the hero always wears a white hat, doesn’t smoke and will treat his babe gallantly. It was those sort of stories that introduced us to the love of the genre in the first place, and although westerns have gotten much more rounded and realistic since those days, it’s still nice to look back at the innocent westerns of our youth.

Clean cut chaps like the Lone Ranger – remember when the bad guy always had a droopy moustache, a black hat and smoked like a trooper. How deliciously sinister he looked when pitted against the square jawed non-smoking hero who would save the day.

These days our films and books are more ambiguous and nothing is black and white, shades of grey turn our works technicolor, making them works of true art that can reflect contemporary concerns. But sometimes it’s nice to think of those good old simple westerns when the hero would always break out into song, before walloping the baddie, restoring order and getting the girl.