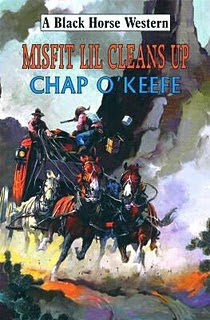 MISFIT LIL CLEANS UP
as by Chap O’Keefe
A Black Horse Western from Hale, 2008

A senseless killing stopped Jackson Farraday from investigating an odd situation in the raw mining settlement called Black Dog. For answers he tricked Lilian Goodnight into spying at the High Meadows cattle ranch.

Lil was dismayed to find range boss Liam O’Grady running a hatwire outfit crewed by deeper-dyed misfits than herself. Then she was obliged to save ex-British Army major Albert Fitzcuthbert – sent to investigating High Meadows by its owners – from renegade Indians.

Everybody had secrets: Lil’s childhood friend Liam; his spouse Mary, and Fitzcuthbert’s cruelly humiliated young wife, Cecilia. Lil was facing problems only her savvy, daring and guns could settle!

Chap O’Keefe definitely knows how to tell a good yarn, he immediately hooks the reader by introducing a number of questions, the answers to which Misfit Lil will have to struggle to find.

There is plenty of action in this fast moving tale and Misfit Lil makes for an engaging lead character. O’Keefe also includes brief mention of her past adventures – this being the fifth Misfit Lil book – that makes me want to find those books and discover just how she and the other characters, already known to her, came to like or dislike each other.

It is also unusual to find the main character, in a Black Horse Western, being female and, for me, this made a pleasant change. HERE
at January 30, 2010