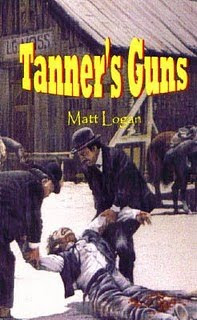 TANNER’S GUNS
as by Matt Logan
Lulu, April 2007
originally published as a Black Horse Western, 1991
Pancho Villa needed guns before he could march on Mexico City. Elliott Blaze had a whole damn’ arsenal for sale. All he needed was someone to deliver the weapons to the bandit general – and that was where Jake Tanner came into it, and in next to no time he was up to his shell-belt in trouble; dodging outlaws, swapping lead with the armies of two countries and, in a final, terrifying showdown, pitting his wits against the federales’ awesome secret weapon!
Tanner’s Guns is a fast paced, gripping, well told story, that has two great main characters, that of Tanner himself and his sidekick, Englishman Harry Stanford-Brown. Matt Logan’s descriptions of locations and action come over as very visual reading. MORE
at January 30, 2010