Howard Hopkins/Lance Howard is a prolific writer. He has published over thirty westerns with Robert Hale LTD's Black Horse Western imprint as well as supernatural thrillers for both adults and children. When the Archive last interviewed Mr. Hopkins he was slaving away at several projects and now we find him having sold another new western, Dead Man Riding.

With so many oaters to his name this makes him a grand old man of the west - even if in reality he is still a vibrant, y 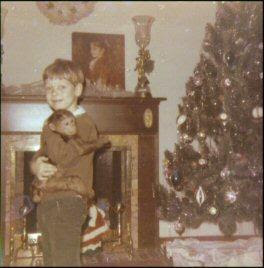 outhful fella. I wondered if Howard worries about running out of ideas?

" I ran out 20 books ago...
Seriously, sometimes it is difficult not to repeat something and for a couple of reasons. 1) Because after I write a book I tend to forget it nearly completely, something I learned to do so I could edits drafts more objectively. And 2) because when plotting sometimes it is tempting to take the well-trodden trail on a troublesome passage. It's at that point I really have buckle down and look for a fresh direction. Certainly there are themes and such I revisit, as do all authors, 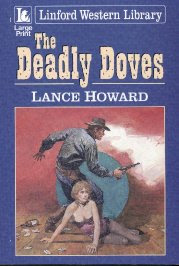 but hopefully those come with a fresh look, a deeper insight or a better take on the subject. As far as running out of stories about the Old West, I don't think that's possible. The West has a life of its own, never dying, never ending and the stories it has to tell are unlimited. "


Howard's forthcoming western is less violent than usual with much of the violence taking place off stage while the writer creates quieter character moments. Is this the start of a new direction?

"With my Black Horse Westerns, yes, I believe so. I want to focus more on suspense and character reaction and interaction. In a number of my previous books I probably pushed the envelope a bit, though they were not that graphically violent, but rather dealt with violent subject matter. I still want to deal with tough subject, however. My upcoming Lance Howard, Dead Man Riding, does as well but violence takes place more off stage or ends at the point of impact. I want to keep it interesting for western fans with plenty of action and all the things they expect from the genre, however, so this book proved a bit difficult, and at times I doubted myself. But in the end it worked out. I think editorial will appreciate the new direction too!"

As well as westerns, Howard works in the horror genre. I asked him to outline his horror work for Archive readers.

"I write in two areas of the horror genre, horror for adults and horror for children (ages 8 and up). My children's horror series is called The Nightmare Club and involves a band of misfit kids who get together with the common goal of solving ghostly mysteries. So far I have three titles in the line: The Headless Paperboy, The Deadly Dragon and The Willow Witch. This series, while being spooky fun, also deals with issues faced by modern children in an age appropriate manner, such as racism, abuse and grief. The series harkens ba

ck to Scooby Doo, The Hardy Boys and Alvin Fernald with a bit of Doc Savage thrown in for good measure. (For more info check out my children’s horror page at www.howardhopkins.com/nightmareclub.htm) My adult horror novels range across the board, from the vampire/western of The Dark Riders to the more Stephen Kingish/Dark Shadows style of Night Demons. At present, I am writing a supernatural mystery series called The Chloe Files, which involves the lead character from my horror tale Grimm in her own adventures. I love writing Chloe. She’s tougher than any of the guys in my stories and though she gets herself into a heck of a lot of ghostly and demonly trouble she also gets herself out of it using her own wits and strength. The first two books in the series are out: Ashes to Ashes and Sliver of Darkness, and along with author Betty Sullivan LaPierre I’ve recently finished a new Chloe book trailer video, which can be seen on my homepage at http://www.howardhopkins.com We are pretty proud of this video. I am even hoping somehow to get a bit of western ghostliness into a Chloe adventure soon, and get her up on a horse!"


Howard has been very encouraging to new writers, such as myself. He is never too busy to offer good wishes or a useful snippet of advice. I wondered what would he tell new writers?

"Don’t pay any attention to the naysayers and those who would subvert your confidence. Ignore the negative types who like nothing better than to piss all over your dreams. There are far too many of these types, who through either petty jealousy or insecurity don’t want to see you succeed. If you NEED to write, have a passion for it, then do it. The realities of the business will set in, but don’t let them cripple your creativity. Be aware of them but only in the capacity of finding ways to overcome them. Writing is tough; you’ll need to be tougher. Don’t be afraid to go for it 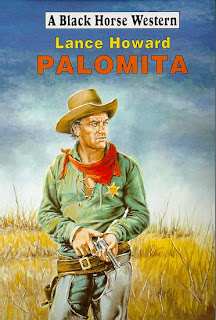 . Try to surround yourself with positive people and join positive groups."


Howard has stuck with Robert Hale and their Black Horse Western range for many years now, honing his craft with each new book. I wonder if he's ever been tempted to stray over to the big American publishers?


"I’ve tried a few times, but the climate over here (in the States, as Hale is based in England) is much different for Westerns. Publishers are conglomerates and the market for westerns isn’t very big at present, though I think there is hope and certainly plenty of potential for expansion. I have had a couple published over here under my own name, Howard Hopkins, but they are more cross genre westerns, which is actually what I prefer to write (such as Pistolero, a riper/western with a bit of conspiracy thrown in. You can check these out along with my BHWs on my western page at: http://www.howardhopkins.com/western-books.htm). I do enjoy the certain type of westerns Hale publishes, however, and the company are a pleasure to work for, so as long as it remains that way I will keep telling the stories I like to tell and hopefully readers like to read."

Whatever Howard does one thing is certain and that his that his fingers will never stray too far from the keyboard. So what future projects can we look forward to?


"Most of my recent stuff has focused on the latest books in The Nightmare Club and The Chloe Files series, and also numerous comic book and short story anthology projects for Moonstone Books. I have a graphic novel based on the 1930s pulp hero The Spider due out any day called Judgment Knight and a Spider wide-screen comic book titled The Strange Case of The Spider and Mr. Hyde. Both have absolutely stunning artwork! And aside from recently co-editing and writing for The Avenger Chronicles (another pulp hero) and The Spider Chronicles, I am excited about doing a Captain Midnight tale (which I feel is one of my best) for an anthology due this year and working on The Green Hornet. I've started into a new western as well. Aside from that I spend a lot of time writing for my Dark Bits blog: http://howardhopkins.blogspot.com/ "


Finally for fun I put to Howard that Clint Eastwood goes up against John Wayne. Who would win?

"Oh, man, an answer either way gets me a High Noon showdown from one camp or the other. I think Clint’s got a little meaner look, so maybe would give him the edge, but they are both icons and I’d like to think they’d team up and tame the Wild West!"


Now that Howard would be something....

Howard's blog can be found HERE

Howard's official website can be found HERE
at January 29, 2010

Great article. And you are right about Howard being encouraging to others, Howard is really generous with his help and advice.

(Really cute as a little boy too!!)