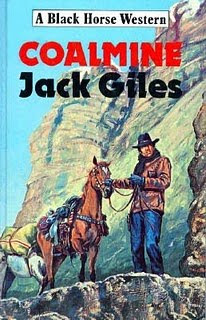 COALMINE
as by Jack Giles
A Black Horse Western from Hale, 1987
The man folks called ‘The Hunter’ had been a mining engineer until he had been injured in a mining accident. Taking pity on him, Helga Rutger, the woman that he had jilted at the alter, found him work - supplying her father’s fashionable restaurant with fresh game. It gave him a living and some sort of pride. But then came a message that was to take him on a trail of death and double-dealing and a confrontation with the Unions and their hired guns.
Although coal mining plays a part in this story it’s only the background to a fast paced tale of intrigue, violence and great characters. Jack Giles (author Ray Foster) tells part of his story in a series of flashbacks that’ll soon have you wondering as to the true intentity of the man known as ‘The Hunter’. MORE
at January 30, 2010