Black Horse Westerns. Many folks here in the USA, even long-time Western readers, do not know what they are, but that’s changing, and I think 2010 will be the 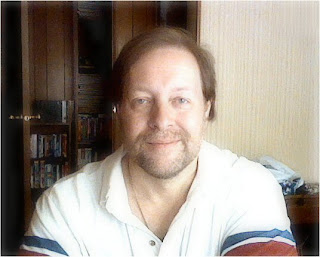 year they burst onto the trail. 2009 saw a great expansion in the awareness of these rugged little hardcovers with their shiny, action-packed covers. Much of that came from the efforts of dedicated folks on the Black Horse Western group with their Author Days initiative, their Black Horse Express online magazine (www.blackhorsewesterns.org) and writer Ian Parham’s Black Horse Blog, as well as a new Express Westerns line of anthologies. A plethora of blogs, including the one you are reading, my own Dark Bits with its Western Wednesdays (http://howardhopkins.blogspot.com) and others have gone viral. Black Horse writer Chap O’Keefe’s Black Horse Extra (www.blackhorsewesterns.com) and new imprint of Misfit Lil books, Robert Hale’s own snazzy new webpage (www.halebooks.com) and newsletter have also forged the trail.

Word is getting out and perhaps riding point in that effort is the man who conceived this Black Horse Weekend, Gary Dobbs. Consummate actor and author, he began his Black Horse writing with a novel that became perhaps the catalyst of growth within the line, igniting more sales than any other BHW before and initiating reprints on select titles. I want to say a personal thank you to Gary, not only for giving me the opportunity to participate in this weekend, but for his enthusiasm and grab-the-bull-by-the-balls attitude.

Which is why I think 2010 will be the year of the Black Horse Western. It’s starting off with a bang and can only get bigger. Express Westerns, on this very weekend, is releasing its second western short story anthology, A Fistful of Legends, which includes some of the cream of the Black Horse crop as well as a couple of talented newcomers, a book slated to compete in the prestigious Western Writers of America Spur awards. Readers will be able to sample 21 writers for the line and see for themselves just how wide a range of talent Black Horse has to offer. Amazon US is now carrying new Black Horse Westerns (but get ‘em fast!), making them easier access for US fans (as well as less expensive).

The future, even in economic downturn, looks bright for these “little horse operas that could”. The Western is far from dead. It is riding strong and will burst into a gallop. And this weekend is its “Hi Yo, Silver!”