Shatterhand and the people by B.J.Holmes 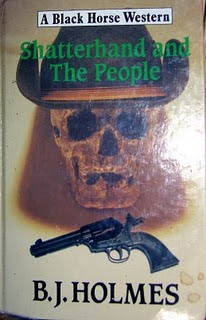 This is an excellent western with a truly epic feel - in fact I'm amazed the author managed to fit so much into its 160 pages and still keep the pace moving like a finely tuned engine.

The book starts of with an author's note that sets the historical context of the story. The main character, Old Shatterhand was originally created by German author Karl May and featured in a long running series of novels- the character was, apparently Hitler's favourite western character. In fact such a fan was the dictator that he gave his generals copies of May's westerns.

B. J. Holmes originally revived Shatterhand for an earlier Black Horse Western, A legend called Shatterhand (I'm gonna track that one down) but for the most part of this novel the character is secondary to the well realised Native American characters who we follow as they set about trying to drive the white man from their soil. Real life historical characters turn up throughout the narrative and the book has the ring of authenticity about it.

THIS FROM THE WIKI:

Old Shatterhand is a fictional character in sixteen western novels by German writer Karl May (1842-1912). He is the German American friend and blood brother of Winnetou, the fictional chief of the Mescalero tribe of the Apache. He is the main character in the Eurowestern by the same name from 1964, starring Lex Barker.

Old Shatterhand is the alter ego of Karl May, and May himself maintained that he experienced all the adventures in person, even though in fact he did not visit America until after he wrote most of his well-known Western stories, and never traveled west of Buffalo, NY. Most of the stories are written from a first person perspective, and Winnetou often calls Old Shatterhand my brother Scharlee (Scharlee being a mispronounced form of Charlie, and ultimately meaning Karl in German). May also wrote stories about the same character traveling the Orient, where he is known as Kara Ben Nemsi.

B.J.Holmes grabs the reader from page one and doesn't let up until the final denouncement.