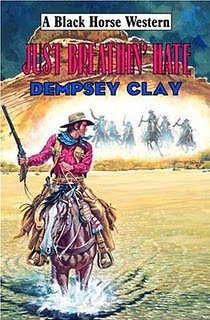 JUST BREATHIN’ HATE
as by Dempsey Clay
A Black Horse Western from Hale, December 2008
When the Law went loco and charged him with killing his wife, innocent Jack Fallon has two choices only – run or hang.
So he ran – to a strange lost valley shut off from the world and ruled by a cult of holy men who would prove more lethal than any posse could ever be.
Paul Wheelahan, the man behind the Dempsey Clay pseudonym, has been writing westerns since the 1960’s and must have had around 1000 stories published. This experience shows in the superb pacing of Just Breathin’ Hate, a book that hooks the reader right from the beginning and doesn’t let go until the end.
The book opens with Fallon being hunted by a posse, you don’t know why at this point and as the plot is revealed more questions are added, such as who really killed Fallon’s wife and who sawed through the branch that snapped thus saving Fallon from hanging. MORE
Posted by Gary Dobbs/Jack Martin at 10:43