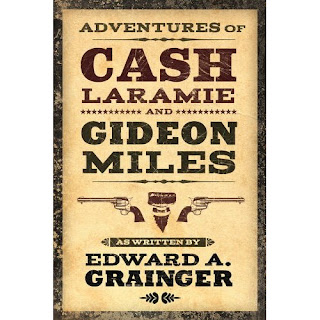 The first book in our Magnificent Seven is the only self published title in the list of recommended titles and comes from Edward A. Grainger AKA David Cranmer.

. The running order is:

Adventures of Cash Laramie and Gideon Miles is a western noir, short story collection spotlighting the thrilling tales of two deputy U.S. Marshals working in 1880s Wyoming Territory. Cash Laramie, raised by Native Americans, is known as the outlaw marshal for his unorthodox way of dealing with criminals and his cavalier approach to life. Gideon Miles is one of the first African American marshals in the service and has skills with guns, knives, and tracking that are unrivaled. This collection broaches issues like racism, child abuse, and morality.

NEXT ON THE ARCHIVE WE ARE PROUD TO PRESENT A CASH LARAMIE STORY FROM EDWARD A. GRAINGER AND CHUCK TYRELL. BELOW MR GRAINGER TELLS US A LITTLE ABOUT THE STORY:

Last winter I wrote a Cash Laramie revenge story called “Justice Served” and asked Mr. Tyrell to take a look. He sent back a beautiful variation of the story called “Gun Justice.” I took many fine suggestions of Gun and incorporated it into the original for Dark Valentine Magazine where it was published. Since that time Dark Valentine has closed, which made me want to take another look at “Gun Justice.”  I was once again taken with Mr. Tyrell’s handling of the story and asked him if I could send it to you for the next Wild West eMonday. I had suggested to him that his name appear solo after the title but he graciously said it should appear as “by Edward A. Grainger and Chuck Tyrell.” He’s a damn good man, fine writer, and I’d be honored if you saw fit to include our story with your next Wild West.

Posted by Gary Dobbs/Jack Martin at 18:06