You can always depend on the Black Horse crowd and author Ian Parham throws his weight behind Wild West eMonday with his piece entitled, PODDAMASQ...er, Paduamass...er, I'll tell you what it's over to Ian.

'Get out, you quack, and don't bring those phoney remedies here again!'

Two months ago Fergal O'Brien returned for his sixth western adventure The Miracle of Santa Maria. As with the previous books, I was asked several times about the inspiration behind the stories and luckily I had a ready answer. But recently I became aware of another source of inspiration, and it's an embarrassing one. Today, I reckon the time is right to share my embarrassment. 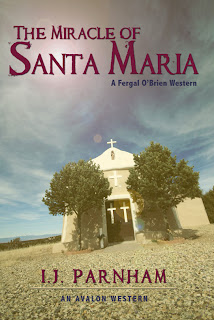 Fergal O'Brien is a snake-oil seller. He sells a tonic, which he claims will cure all ills. Not surprisingly, its only effect is to make the victim run to the toilet, although in one book he did make a pig happy. His partner Randolph McDougal helps him convince sceptical customers to part with their money by drinking the tonic and then being 'cured' of various fictitious ailments. Over the years he's been cured of lameness, a wooden leg, an extra leg and, if the publisher likes the seventh book, a severe attack of death. In short, Fergal is a devious, double-crossing snake and I love writing about him.

''I've been bringing cures from Pilgrim Heights to Province Town. Treated rabid fever down on Queen Anne Road. Gout or gastritis, mumps or bronchitis, bites and burns and blue abrasions, got a pill for all occasions!'

Fergal first came to mind when I mused about whether the popular 1980s BBC sitcom Blackadder would ever return for a fifth series. In the four series the devious, double-crossing snake Blackadder and his dangerously stupid sidekick Baldric had lived through Medieval times, Elizabethan times, Georgian times, and finally the First World War. I wondered what would happen if Blackadder and Baldric ended up in the Wild West…

Baldric: 'Ooh, Mr B, that nasty gunslinger says he'll be waiting for us outside the saloon at high noon.'

Blackadder: 'Right, Baldric, that means one of us will have to strap on a six-shooter, go out on to that windswept street and get filled with more lead than a particularly thick pencil. And let's face it, Balders, that man's you.'

Baldric: 'Wait, I have a cunning plan!'

Blackadder: 'Baldric, your last cunning plan was to sell toys to Billy the Kid, which was the worst cunning plan since Wyatt Earp thought the O.K. Corral sounded like a particularly quiet place for a vacation…'

I amused myself with this nonsense until the thought came that I might be on to something. Two idiots who arrive in the Wild West and try to make their way sounded like a story I'd like to write and for some reason I thought about a medicine showman.

'I wiped out impetigo on the banks of Buttermilk. Flu is under firm control in Powderhole!'

I had a clear vision of this man, his clothes, his stature, his features, the way he walked, the way he talked. I assumed I must have seen him in a film or a tv series, but I didn't know where. As I'd already decided Fergal was Irish, I was free to ignore that vision, but enough of it remained to give me a start and so Fergal, the devious snake-oil seller, was born.

Over the next ten years I wrote a Fergal adventure every other year and each time, as I got into a Fergalesque frame of mind, I'd ponder on the question of who was that medicine showman. As the snake-oil seller is a stock, colourful western character I hoped he'd appeared in a good film, perhaps a less familiar John Ford western, and that a great character actor had played him. But I felt doomed to never resolve the mystery until, that is, I did, and then I wished I hadn't.

'My specialities are Audiology, Mycology, Sarology, Teritology, Embryology, psychology, zoology! And every other 'ology you can think of!' 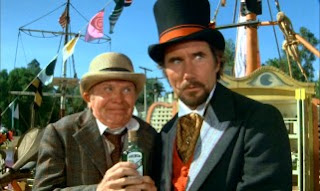 I won't detail the process as it involved dead ends, Internet detective work, and much wailing when I finally found my man on youtube. It turned out that the actor I'd envisaged was the legendary western star Jim Dale, who had first come to the attention of western fans with his well-crafted performance as Marshal P. Knutt in the existentialist western Carry on Cowboy.

Ten years later, he returned to the western genre to play Doc Terminus, a snake-oil seller who with his sidekick Hoagy, played by Red Buttons, plies his trade in Passamaquoddy. I can't say any more as I can't remember seeing the movie, but I guess I must have caught a scene. I hadn't remembered Terminus's beard, Fergal favours green, and Randolph McDougal isn't Red Buttons, but the Fergal O'Brien in my mind is Jim Dale.

And the embarrassing thing that made me bang my head on the desk and cry, 'Why oh why did it have to be him?' Well, the classic western movie that gave me the inspiration for a character I've spent more time writing about than anyone else was… Pete's Dragon, a Disney musical about an annoying freckle-faced orphan and his cute pet dragon. 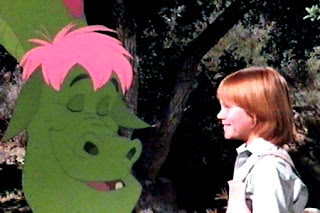 Find Ian's own corner of the Wild West Web HERE
Posted by Gary Dobbs/Jack Martin at 09:07