Custer's Last Stand occurred on June 25th - 26th June 1876. It happened near the Little Bighorn River in Montana Territory. By all accounts a fierce battle that  saw the combined forces of the Lakota, Northern Cheyenne and Arapaho going against the 7th Calvary regiment of the US Army. The Seventh were of course led by General Custer and during the fierce battle he and the regiments under his command were wiped out. Five of the companies that made up the Seventh were annihilated that day.

The only survivor from the Seventh Calvary was a single horse named, Comanche. This incredible animal had been shot several times during the battle but when the army rummaged across the battlefield, bodies of both men and horses spread everywhere, the horse called Comanche was discovered, the hand of his dead master , Captain Myles Keogh still clutching the reins. Man and horse had been through much together.

It was during1868, when Comanche received his first wound while fighting Comanche Indians on the Cimarron River near Fort Dodge, Kansas, legend has it that it was Captain Keogh who cradled his head while a farrier removed the arrow shaft that had broken off in his right hind quarter, and perhaps even suggested the horse’s name.  Comanche recovered quickly and resumed his duties on the frontier.  He was wounded again in 1870, when he was shot in the right leg during a skirmish in Kansas near the Saline River.  He was lame for several weeks, but “came through like an old soldier,” wrote an eyewitness, “and was [soon] ready for duty, good as new.” In 1871, Comanche’s unit, Troop I, was transferred to Kentucky, where the army was dealing with post-Civil War developments such as the Ku Klux Klan, carpetbaggers, and moonshiners.  While taking on a crowd at an illegal distillery, said the observer, Comanche received “a slight flesh wound in the right shoulder, but he quickly recovered.” In 1873, Troop I received orders to return to Ft. Abraham Lincoln in the Dakota Territory, to rejoin the Indian wars under Custer.

Comanche remained with his owner on Custer Hill. While all around him soldiers slaughtered their horses to hide behind and shoot, evidence and oral tradition shows that Keough crouched between Comanche’s legs, holding onto his reins, while he was fighting. Keough was killed, but his hands still clutched Comanche’s reins. Warriors left the horse alone; it would have been bad medicine to take a horse so closely tied to his owner that the man held the reins even in death. 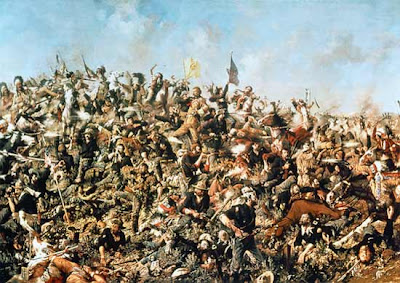 Initially the horse was to be put down but he was saved when a trooper poured whiskey into his hat and the horse perked up and came over to drink the strong spirit. Comanche became known as the silent witness because he could say nothing of what he had seen during the battle and he was lovingly looked after by the army. He would live for another seventeen years and it is said that he developed a taste for booze and would often sip with the soldiers who looked after him. The first case of military post traumatic stress, perhaps!

Below is an interesting letter from 1878

I. The horse known as "Comanche", being the only living representative of the bloody tragedy of the Little Big Horn, June 23, 1876, his kind treatment and comfort should be a matter of special pride and solicitude on the part of every member of the Seventh Cavalry to the end that his life be prolonged to the utmost limit. Wounded and scarred as he is, his very existence speaks in terms more eloquent than words of the desperate struggle against overwhelming numbers; of the hopeless conflict, and of the heroic manner in which all went down on that fatal day.

II. The commanding officer of Company "I" will see that a special and comfortable stall is fitted up for him, and he will not be ridden by any person whatever, under any circumstances nor will he be put to any kind of work.

III. Hereafter upon all occasions of mounted regimental formation "Comanche" saddled, bridled, draped in mourning, and led by a mounted trooper of Company "I", will be paraded with the regiment.

Posted by Gary Dobbs/Jack Martin at 13:31

Definitely an amazing story about this horse. I remember hearing about it several times and it never fails to touch me somehow.