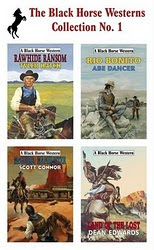 The second title in our magnificent eSeven western eBooks is the Black Horse Bundle which is actually four titles in the one volume, making it great value for money. And due to it's success we have been told by Hale that they have plans to make many more Black Horse titles available digitally - starting this October the company will be releasing eBooks as individual titles priced £3.99. There will be five titles published in October and then another 10 in December. And after that Hale are looking at issuing further titles digitally on a bi-monthly basis.


But the bundle is where Hale first dipped their Black Horse toes (hoofs) in the digital waters and what a great offer it is. Four complete books that usually retail for around £13 each for less than the price of one.

RIO BONITO: Joe Kettle possessed the grit and fighting blood of his father, and his father before him. And he needed it, for Wilshaw Broome – once a loyal foreman of the Standing K ranch - was using hired gunmen in his effort to seize the Kettle domain. Supported by an ageing Hector Chaf and Ben McGovren, Joe sets out to win back his birthright. But each of the three men had his own special reason for going up against overwhelming opposition, and it wasn’t all to do with property and livestock To overcome Broome’s force, they would play a waiting game, take advantage of the hidden trails and scrub thickets along the Rio Bonito. Then, when the time was right, they would not hesitate to meet force with force and guns with guns.

LAND OF THE LOST: Young drifter Hal Harper rides into the remote town of Senora when he finds himself looking down the barrels of the law. What Harper does not realise is that the ruthless outlaw Tate Talbot and his gang have managed to get themselves elected as sheriff and deputies. Talbot has discovered that there is a wanted poster on his own head worth a small fortune so he has the ingenious idea of collecting his own bounty by killing the innocent Harper and claiming the drifter is the outlaw known as Diamond Bob Casey. Harper manages to escape to the remote uncharted desert south of Senora but can he survive in the Land of the Lost?


RAWHIDE RANSOM: Cole was a good sheriff, maybe a mite too lenient at times, but when the chips were down, the town of Barberry fully appreciated his prowess with guns and fists. But the didn’t know there was a tragedy in his past that would affect his actions – until a local boy was kidnapped while Cole was supposed to be guarding him. And the only one who could deliver the ransom was Cole himself.

MCGUIRE MANHUNTER: Manhunter Jim McGuire hung up his gun and settled in White Ridge aiming to live a quiet life, but his past profession soon called him back. His young charge Billy Jameson was wrongly accused of murder and the only way to save him from the gallows was to take on an assignment from the corrupt Mayor Jake Nixon. But finding the on-the-run thief Barney Dale wasn’t as straightforward as it seemed. Barney was the only witness to a murder committed by Nixon and unbeknown to Jim the mayor has hired ruthless guns to ensure that as soon as he finds Barney both of their lives will be cut short. With the manhunter becoming the hunted man, can Jim defeat the many guns Nixon has lined up against him?
Posted by Gary Dobbs/Jack Martin at 04:44