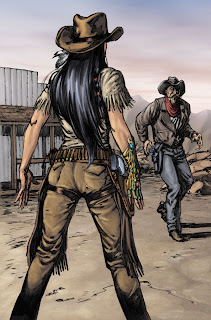 The Wild West eMonday build up begins here - and here's the deal. We give you three days of western related material from some of the genre's masters and you, the reader, responds by purchasing a western eBook this coming Monday. It needn't cost much - indeed some of the titles we are recommending cost as little as $0.99c. The object of the event is for western fans far and wide to come together, support the genre and show what a thriving fan base the western boasts.

The western can be many things - any kind of story can be told within a western setting and the genre can be relevant to this tarnished modern world.

There's some great stuff coming up - including an all new Cash Laramie story called Gun Justice. The last time we posted a Cash story the piece written by the talented Edward A. Grainger,titled, Melanie, received over 50 reader comments. You can still read that story HERE and for the new story Mr Grainger is joined by the Black Horse Western legend, Chuck Tyrell for a story which we're sure will be every bit as popular as the astounding Melanie. The anthology collection, The Adventures of Cash Laramie, pictured below, available now, is also one of the magnificent seven western eBooks we'll be heavily promoting. 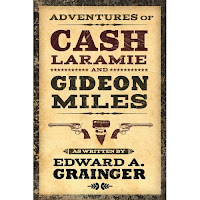 But it's not all about eBooks. It's not about the format - digital or print, but about the western itself  and thanks to the wonderful Steve M. of the essential Western Fiction Review we will be presenting scores of western fiction reviews. We'll also be looking at the works of western legend, Louis L'amour, a great many of which are available as eBooks,  and speaking to the great man's son.  We got scores of interviews - both all new and reworkings of earlier pieces, reviews, genre specific articles and much much more.

If you're a seasoned western fan or a newbie wanting to discover more about the genre then the TAINTED ARCHIVE is the place to be this weekend.

The reason we are putting the emphasis on eBooks is that this is very much the medium of the moment, indeed some say it is the future of popular fiction and so the westerns needs to be visible if it it to prosper and move forward into the new digital age.