In honour of Jack Martin 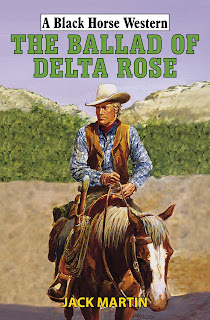 The Ballad of Delta Rose is the third Jack Martin western, and so in honour of the man whose name I have adopted for my western fiction I thought I'd repost the following, which originality appeared prior to the publication of my first western all the way back in 2009. 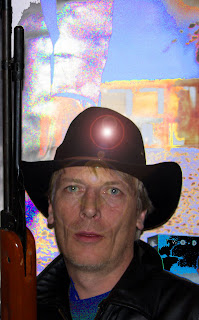 Jack Martin. The man whom I looked up to as a kid, he seemed ten feet tall, and the man whose name I use for my western fiction.

Jack Martin was a coal miner in the South Wales fields - indeed it was the dust from this environment that eventually killed him. A arduous job and in those days there was only basic safety equipment. Lives were often lost in explosions and one time the entire mine shaft flooded and over 20 men were drowned before they could get out. But all that was before I knew him.

I was born in 1965 and Gramps had retired by the time I was five so I can't really remember him working. He was a tall man, always dressed immaculately, even when doing the garden he wore a shirt and tie. He grew the best tomatoes around and my first ever paid job was collecting horse manure from the mountain for his garden. I think he gave me something like 10p a bucket which was good money in those far off days when the world was black and white and the sun always shone.

My Grandmother often referred to him as Father Christmas and although they often argued as people did in those days, about anything really - leaving the door open, not wiping your feet and trampling garden over the mat. Their relationship was a strong and loving one. They both spoiled me rotten and I always got the latest comics and would go on the annual British Legion day trip to Porthcawl with them. Though often only me and my nan went and gramps stayed home and probably went for a sneaky pint down the legion.

Hey, sorry about the ancient history but I feel almost old enough to remember black and white radio.

Gramps loved the westerns and was always reading a western novel. When there was a western on TV I would watch it with him and he would tell me stories of when he was in the wild west (completely invented, of course. The furthest West he ever went was Tonypandy) and in these stories he would be teamed up with John Wayne or Gary Cooper but never Clint Eastwood - he never really liked him and would refer to him as an unshaven hooligan. As a young boy I believed every word of these wild stories. Gramps was a natural storyteller.

Jack Martin -  his love of westerns was passed onto me and apart from the fact that Eastwood is my all time fave, our tastes are the same.

When I published my first western novel, Tarnished Star with John Hale LTD I was proud that it contained the byline - by Jack Martin. When trying to decide on a pen name to keep my western fiction separate from my other stuff it was only natural to use Gramp's name.

He's been dead now for close on thirty years and I still miss him but I guess he's still here, inside me - his ideals, his ways, his humour and when The Ballad of Delta Rose  sees print this month it is as much his work as mine. For without him I would never have developed my interest and love for the American West. .
Posted by Gary Dobbs/Jack Martin at 08:31