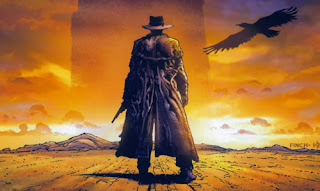 Fans of Stephen King's Dark Tower series will be dismayed to learn that studio bosses have pulled the plug on the movie project.

Universal Pictures have decided that the cost to do the project justice was just too high in these uncertain times. The ambitious story was to be told over three movies and a TV series.

Development on the fantasy western were well advanced ; Javier Bardem  was to play gunslinger Roland Deschain, the director was Ron Howard, and  NBCUniversal also had the broadcast, cable and studio platforms to release it.

“I really can’t stop thinking about it,” Director Ron Howard recently said . “We’ve been meeting and talking and I’ve been reading and researching and just kind of living with it. I’ve been constantly going through stuff and I’ve just been re-listening to it [on audio books] on my iPod and we’ve been sending e-mails back and forth, ‘What about this approach? What do you think of this idea?’ We’re finding the shape of it. We’re moving quickly now, as quickly as we can, and I feel challenged in the most exciting ways.”

Posted by Gary Dobbs/Jack Martin at 09:51