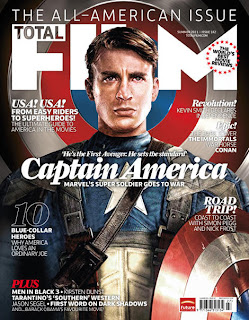 With the imminent release of Captain America: The First Avenger most of the main UK entertainment magazines are sporting Captain America covers. SFX magazine even went so far as to give away a cool Captain America Frisbee with the cover boasting: We'll hurl them on the beaches.

Empire though to be contrary are this month going to press with a Hobbit cover sporting photographs of both Gandalf and Doctor Watson looking suspiciously like Bilbo Baggins.

The current issue of Future's glossy and expensive, Comic Heroes is the best issue thus far. It's a Batman special with some great articles and pictures of everyone's favourite psychotic with a kinky clothing fetish. The next issue will be along similar lines only this time concentrating on Superman. Comic Heroes may be a little expensive at £7.99 but it's of the highest quality and has become a must buy here at the Archive. 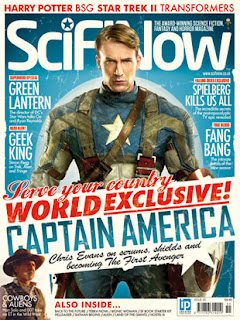 The new Paperback Fanatic has just gone on sale - that's issue 19. The mag's really settled into it's new compact format and as always it's packed with interesting and lovingly composed articles. The letters page of this magazine is also as entertaining as any of the articles and the editor makes a good call in his choices. Subscription only this one. Find details HERE.

After the greatness that was their recent Flesh story, 2000AD have again returned to classic characters for another run of my own all time favourite character, Bill Savage - eat your heart out Dredd - I don't buy 2000AD every week these days though I did for the Flesh story and I will for the new Savage series.

Seems I'm after the nostalgia - and on a related note I recently mentioned to comic legend, Dez Skinn that a high quality, glossy, adult magazine running reprint material from the glorious past of British comics would be successful. Dez didn't think so, feeling that UK comics needed to create all new material in order to survive. But you know I still think a glossy mag with a mixture of strips and articles would be a huge success. Think of it - call it something retro and onomatopoeic like Wow!!! or Blow Me!!! , and fill it with articles and strips like Charley's War, Mach 1, Dredger, Darkie's War and Dan Dare as well as a few humour strips from the archives of Whoopie, Whizzar and Chips and Cor, as well as the odd nude starlet pic to give the thing class.

Now that would be worth shelling out for - maybe I'll try and pitch it, but for now I'm off too play with my Captain America Frisbee.
Posted by Gary Dobbs/Jack Martin at 04:23