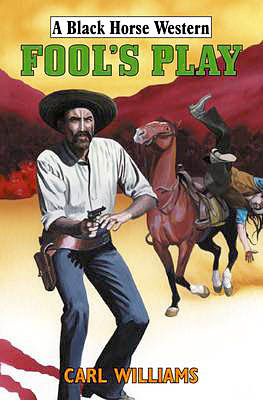 By Carl Williams
A Black Horse Western from Hale, December 2010

Royce rides into Jawbone looking for a doctor and finds nothing but trouble. But then how can he expect anything else when he lives by the gun?

Royce signs on with the land baron Yale Jamerson, hoping for a job that will give his conscience a rest, but Jamerson’s plans to dam the river and charge tolls on the road lead the townspeople to revolt.

Now Royce is forced to choose between his livelihood and his conscience. Will he choose the right path, especially if it means a showdown with his closet friend?

As far as I can tell Fool’s Play is the first Black Horse Western by Carl Williams. It is also a longer book than most of the BHW I have read recently – it has the same number of pages but much smaller print.

Jamerson is a hard man attempting to control and hold back progress. He’s not an evil man but his methods of trying to hold onto a way of life he knows are not welcomed by the people who live in the nearby town, people who want to see their town grow. This leads to all kinds of tense confrontations, particularly when the town brings in some lawmen that are nothing more than hired guns.

Royce makes for an excellent hero. He’s a man who can see the problems facing each side in this power struggle. Of course it soon becomes apparent Royce will have to quite working for Jamerson and side with the town and the woman who is showing an interest in him. This leads to a spectacular showdown on the dam.

Carl Williams definitely knows how to build a story and hook a reader, making this a book that I found very difficult to put down until I found out how everything was resolved. The climax to the story bringing about some surprising endings for a few of the characters; which in a couple of cases was not how I expected things to finish.

On the strength of this book I’m definitely looking forward to more from Carl Williams. Fool’s Play is available to buy now.
Posted by Gary Dobbs/Jack Martin at 18:22