Well after all this work putting together Wild West eMonday, I'm sure you all won't begrudge me a little self promotion. And so here is Steve M's review of my latest novel, The Ballad of Delta Rose. I'm especially pleased with this review as Steve certainly knows his westerns.


By Jack Martin
A Black Horse Western from Hale, July 2011 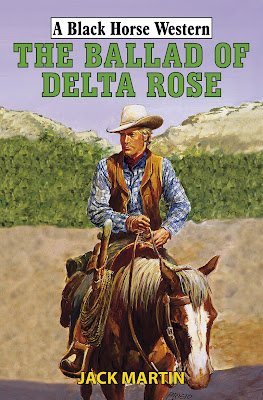 After more than twenty years of living life on the road, Delta Rose returns to the ranch he once owned with his fiancée, Etta James. A bullet wedged close to his heart has dealt Delta the dead man’s hand.

He soon discovers Etta has a secret: they have a son who, by now a young man, is in trouble. He is charged with both robbery and murder. Can Delta redeem himself for a past ill spent and save the life of the son he never knew he had?

Jack Martin starts this book with a strong opening scene and the story never lets up from there. The plot moves forwards quickly and defies the reader to put the book down before finding out how things will end for Delta Rose. Can you save his son? Will he tell his son that he is his father? Will he tell anyone he has come home to die, and will he still be alive by the end?

Jack Martin puts his characters through some strong emotional challenges and does so with confidence and resolves them believably. As the bullet moves closer to Delta Roses’ heart we see the hero become paralysed, share his fears that he will not live to save his son. The action sequences are equally well portrayed.

The author’s sense of humour also comes through as he mentions a dime novel written by ‘some purple prose-loving hack named G.M. Dobbs.’ For those who don’t already know Jack Martin is a pseudonym used by writer Gary Dobbs.

The book ends with a twist that did come as a surprise, and if you want to know whether Delta Rose lives or dies then you’ll just have to get hold of a copy for yourself as I’m not going to reveal that answer here.

The Ballad of Delta Rose was officially released on July 29th so is available now, but be quick if you want a copy as Jack Martin’s previous two books sold out extremely quickly.
Posted by Gary Dobbs/Jack Martin at 14:23