The town of Redemption surely does need some – especially with a crooked marshal in charge. Texas cowhand Bill Harvey, injured in a cattle stampede on a drive through Kansas, is laid up in Redemption waiting to heal. Tended to by a shopkeeper’s lovely daughter, Eden Monroe, he figures there are worse places he could have ended up… 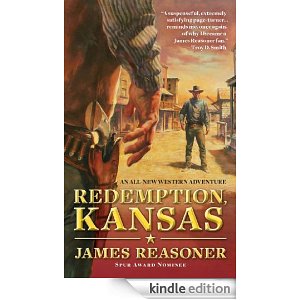 But the longer Will stays in Redemption, the more he gets the feeling that there’s something wrong. A series of unexplained killings plagues the town and has the local shopkeepers fearing for their lives. It’s up to Bill to figure out what’s going on before more people, including his beloved Eden, get caught in the cross fire.

This is the first in a new series, and, going by the strength of this book, I hope it has a long run.

James Reasoner has created an engaging hero in Bill Harvey, a young man who will go through some changes during the course of this story. Events take place that will see a change in his profession and his life in general. Another great character is Eden Monroe, and seeing her and Bill’s relationship develop is one of the highlights of this book.

There is plenty of action, and we witness Bill being drawn into solving the mystery of the killings when those who are helping him recover are threaten. There’s some superbly drawn bad guys, in particular Zach Norris.

Redemption, Kansas once again strengthens James Reasoner’s reputation as being one of the best of the authors writing westerns today. If you’ve never read any of his work before then this excellent book is the perfect place to start. For fans of his writing, make sure you don’t miss this one, as I’m sure, like me, it’ll leave you eager for the next in the series.
Posted by Gary Dobbs/Jack Martin at 04:32

This is such a fine novel. Highly recommended.