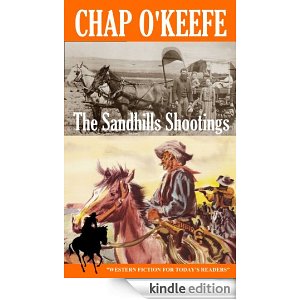 Author Chap O'Keefe is a good friend of mine, but that didn't guarantee his inclusion among the Magnificent eSeven - far from it, each of the seven titles chosen for promotion during the Wild West eMonday are fully deserving of their place on the list. Indeed the problem I had was that there are several O'Keefe books now available as eBooks and being a big Misfit Lil fan I was torn as to which title to include amongst the seven eBooks. I had originally intended to feature Misfit Lil Cheats the Hangrope, but In the end I opted for The Sandhills Shootings, simply because it is Chap's newest eBook release. It may not be a Misfit Lil title but protagonist Joshua Dillard is no slouch.

Ex-Pinkerton detective Joshua Dillard was a gun for hire. He was also a man given to doing only what he had a mind to do. So he refused the presumptuous Omaha financier Fergus O'Callaghan's money, but rode the trouble-busting trail to the Sandhills region of Nebraska anyhow. In that country were his dead wife's brother Tom Holley, a tenderfoot deputy unversed in frontier life's wicked ways, and beautiful Ruth Swain, gutsy widow of a murdered homesteader. Both were up against the odds. Their obvious enemy was salty rancher Stella Tinwald, who cracked the whip for the cattlemen's association -- when she wasn't corraling likely young studs of the two-legged kind. Joshua was set to take on Tom's and Ruth's fights. The odds were stacked against Joshua and a drygulcher's bullet pushed him to death's brink ... but he was a mighty hard man to kill.

James Reasoner: "Joshua Dillard is a very likable hero, tough and competent
enough to handle just about any situation, despite his occasional self-doubts, but not a superman by any means. I’m ready to read more about him right now."

Read a sample of the novel HERE
Posted by Gary Dobbs/Jack Martin at 03:48