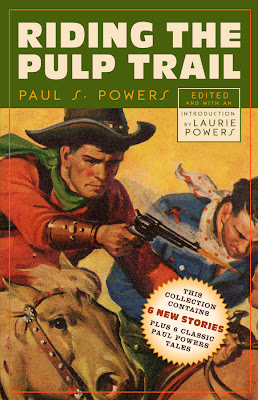 Paul S. Powers is a name well known to lovers of the old pulps, the prolific writer's name graced many a copy of Wild West Weekly as well as numerous other pulps.

And this new collection of twelve Paul Powers classics was named by yours truly. How cool is that? Laurie Powers, granddaughter of Paul Powers asked for suggestions regarding a title for this collection and my suggestion, Riding the Pulp Trail,  was used. I'm really pleased with that as it means my name is associated in some small way with a great slice of western fiction history.

Most fans of Western fiction know Paul S. Powers as one of the foundation authors of the famous pulp magazine of the 1930s and 1940s, Wild West Weekly. Now, here for the first time, are twelve Paul Powers stories written in the years after Wild West Weekly stopped publication. Six of these stories were published in magazines such as Exciting Western, Thrilling Western, The Rio Kid Western and Thrilling Ranch Stories. The other six are brand new stories—never before published—that were discovered in 2009. Altogether they make for an outstanding collection of western stories that represent the glory years of the Western short story and the best of Powers’ prolific pulp Western career.

Anyway check the book out HERE

Posted by Gary Dobbs/Jack Martin at 08:32