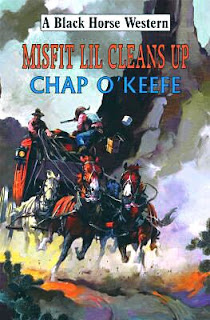 as by Chap O’Keefe
A Black Horse Western from Hale, 2008

A senseless killing stopped Jackson Farraday from investigating an odd situation in the raw mining settlement called Black Dog. For answers he tricked Lilian Goodnight into spying at the High Meadows cattle ranch.

Lil was dismayed to find range boss Liam O’Grady running a hatwire outfit crewed by deeper-dyed misfits than herself. Then she was obliged to save ex-British Army major Albert Fitzcuthbert – sent to investigating High Meadows by its owners – from renegade Indians.

Everybody had secrets: Lil’s childhood friend Liam; his spouse Mary, and Fitzcuthbert’s cruelly humiliated young wife, Cecilia. Lil was facing problems only her savvy, daring and guns could settle!

Chap O’Keefe definitely knows how to tell a good yarn, he immediately hooks the reader by introducing a number of questions, the answers to which Misfit Lil will have to struggle to find.

There is plenty of action in this fast moving tale and Misfit Lil makes for an engaging lead character. O’Keefe also includes brief mention of her past adventures – this being the fifth Misfit Lil book – that makes me want to find those books and discover just how she and the other characters, already known to her, came to like or dislike each other.

It is also unusual to find the main character, in a Black Horse Western, being female and, for me, this made a pleasant change.

Mention must also be made of the excellent cover painting – the artist sure knows how to use light, shadow, and hints of colour to great effect. This scene ties up nicely with an exciting chase of a stagecoach by Indians within the story.

When the book was originally released it sold out in twelve days! This must be some indication to how popular Chap O’Keefe’s westerns are.

I always like to follow bad news with good so I’ll remind you that Black Horse Westerns are first and foremost produced for libraries so there’s nothing to stop you going there and requesting a copy. I’m sure you’ll find it worthwhile.

as by Jack Martin
A Black Horse Western from Hale, March 2010


Arkansas Smith: the name was legend. Once he had been a Texas Ranger, but now he was something else entirely. Some said he was an outlaw, a killer of men and a fast draw. Others claimed he was a kind of special lawman, dispensing frontier justice across the West and bringing law to the lawless.

Arkansas Smith arrives in Red Rock looking for those who shot and left his friend for dead. He vows to leave no stone unturned in his quest to bring the gunmen to justice and, soon, those who go against him must face the legendary fast draw that helped tame the West.

Jack Martin (Gary Dobbs) presents the reader with an entertaining story with his second western. Arkansas Smith is an engaging hero whose background is only hinted at in a number of flashbacks that serve to flesh out the character, yet also leaves you wanting to find out more; something that is planned to happen in further books about Smith.

Gary Dobbs’ writing is confident and moves at pace, the story building up nicely to its final shoot-out. Smith is not the only memorable character, Rycot being one of my favourites. And for those in the know, Gary also tips his hat to a few other Black Horse Western writers by having characters named after their pseudonyms – he even mentions himself – which I felt was a fun touch.

The book is easy to read and difficult to put down, and left me eager for more tales about Arkansas Smith.

as by Bill Williams
A Black Horse Western from Hale, November 2009

Steve Ross has been forced to give up the struggle to keep his small ranch going during Arizona’s worst drought in living memory. He intends to leave town in the morning, but events result in him being given an unusual ultimatum.

He must face the prospect of hanging for killing a man, or becoming the Deputy Marshal of Craigy Plains. Ross has never owed or fired a pistol, but following his appointment as a lawman he is taught how to handle a weapon by an old gunfighter. His prowess with a gun is soon given a severe test.

He is drawn into tragic events that put his own life in the greatest danger.

Although Steve Ross is the person who this story revolves around, Bill Williams spends as much time fleshing out the many other characters that fill this book. Although you don’t realise at first all these people will play important parts in bringing the many, seemingly, unrelated threads together by the end.

Bill Williams writes well and is very readable. He drops little hints as to what is going on and cleverly uses misdirection a couple of time to make you wonder as to just who has been killed. There is plenty of action but it’s Bill William’s character studies, their motives, the guessing of who is double-crossing whom and why, will Ross get back with Stephanie, and will any of them be alive at the end, kept me reading.

The final major showdown takes place a few chapters before the end, everyone’s true identities and fates resolved; or so you think, for Bill Williams continues the stories of those left alive, telling what happens to them, ties up the few remain loose threads, and has a few more tragic surprises waiting for his readers.

From what I can tell this is Bill Williams’ ninth BHW and having now read my first book by him I am keen to try more of his work.

Posted by Gary Dobbs/Jack Martin at 04:01

Thanks for re-running these, Gary. Anyone needing more persuasion than Steve's fine review of Misfit Lil Cleans Up can read an excerpt at http://chapokeefe.webs.com/bhemcl . The libraries, and some online booksellers, should be able to offer it either in the Black Horse Western edition or the Linford Western Library reprint, which has a different but equally effective cover by Michael Thomas.