They Finally get it - after all these years

Frog Chorus notwithstanding, I've never understood why Paul McCartney has been largely perceived as being bland and middle of the road - blandness is not a charge he deserves and  he's most certainly standing left field of the middle of the road. Recently two of his solo albums were reissued - 1970's McCartney and `1980's McCartney II. Both albums were largely slated at the time of original release but not any more and no less esteemed music magazines than Mojo and Uncut are praising both platters, although it is the second album that is getting the greatest praise. Personally I think the 1970 album is the best of the two, but each to their own.


Mojo magazine said of McCartney II - in 1980 it sounded like a man losing his mind but today it sounds fabulous. The magazine also went on to claim that Macca invented techno with the odd but jumpy, Temporary Secretary. That particular song is a strange one indeed, but in structure it's not that different to Paperback Writer. Both songs were composed in the manner of a business letter, but where Paperback Writer told of a struggling hack wanting success, Temporary Secretary told of a business man wanting someone sweet to bounce on his knee - a belly dancer or a diplomat are two of the choices. Confused? Get the album and listen to the song. For those who have a phobia about Macca should take Lennon's advice and, open up your mind.

On times it's been hard to be a Macca fan - The Frog Chorus, that damn knighthood (working class hero, indeed), appearing on the X-Factor, switching the order of credits on Beatle songs, but the truth is the guy's a musical genius. And there are many reasons to love him - here are just five: 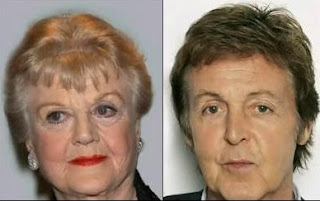 1 - The music
2-He's slightly bonkers in a mad professor sort of way.
3-His sense of humour
4-He looks like Angela Lansbury and she's lovely in a granny sort of way.
5-For going on a drunken bender and calling David Blaine a C**t

Below I have embedded some top quality Macca that even non fans will have to admit is groovey:

Email ThisBlogThis!Share to TwitterShare to FacebookShare to Pinterest
Labels: paul mccartney, the beatles