Nicknames, aliases and fancy monikers were popular in the Old West - often people would assume a name in order to hide from the law but sometimes it was in order to build a reputation.More often again these colourful monikers were attached to a person by friends or enemies and the name would stick whether they liked it or not.

Below is a list of Wild West nicknames followed by given birth names. 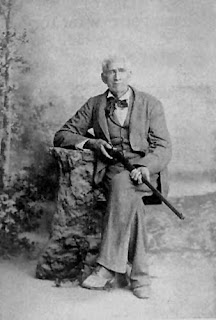 Often the non-de-plume attached to a person would be descriptive of their appearance or manner. Thus the cold hearted bandit Charles E. Bolton became known as Black Bart and Frank Lelsie, a Tombstone gunman became known as Buckskin Frank.

Some more aliases were:

Theodore Roosevelt was wildly known as Bullmoose because of his hunting skills.
Ella Watson who was lynched for rustling in Wyoming was known as Cattle Kate
Crawford Goldsby was known as Cherokee Bill
Nat Love (p

Alice Tubbs, a mining town gambler was more commonly known as Poker Alice
Conman and saloon owner Jefferson Smith who was eventually lynched in Alaska was Soapy Smith. Be sure to check out Jeff Smith's Blog - he a descendant of the famous conman and writes much about the old scoundrel.
General George Armstrong Custer was known as Longhair.
Sam Bass, outlaw, had the rather romantic title of, The Robin Hood of Texas and fellow outlaw, Charles Fallon was known as Rattlesnake Jake.

These are just a few of the colourful nicknames that abounded in the Old West - it has been an hobby of mine to document as many of these as possible over the last few years and I have a list running into two hundred names..
Posted by Gary Dobbs/Jack Martin at 19:06