eBooks are for bloodless nerds.... 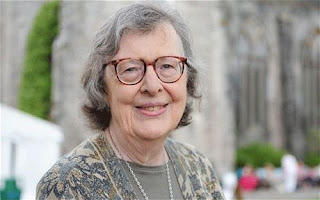 The Telegraph's Way With Words Festival in proving to rather lively this year - Penelope Lively that is. The author has kindled up a storm with her comments about eBooks made at this year's festival.

Author Penelope Lively, 78, the Booker Prize-winning writer and St Trinians School Mistress lookalike, stated that eBooks are for “bloodless nerds”. She said that Kindles and other devices to which you can download novels are no substitute for real books and no self-respecting bibliophile should want one.


“There are two points at which I might use a Kindle", Lively said. " when travelling, though I don’t do much of that any more, and when in hospital, which is quite likely to arise at some point. So that could be very useful.
“But as a general way of reading books, no. It seems to me that anyone whose library consists of a Kindle lying on a table is some sort of bloodless nerd.”

Despite her opposition to the technology, 13 of Lively’s books are available to download from the Amazon website as a Kindle e-book, including Moon Tiger, which won the Booker Prize in 1987.

The Telegraph Ways With Words Festival celebrates its 20th anniversary this year with a fantastic line-up of writers including Stella Rimington, Alan Hollinghurst and Harry Hill. The festival takes place from July 8-18 2011 in the beautiful setting of Dartington Hall in Devon, offers those who read books the rare opportunity to meet those who write them.

Posted by Gary Dobbs/Jack Martin at 14:34

I agree with her absolutely. Ebooks may be ok when traveling but otherwise I can't stand the things. I'm still stocking up on "real" books because the time might come when the "fake" books take over.